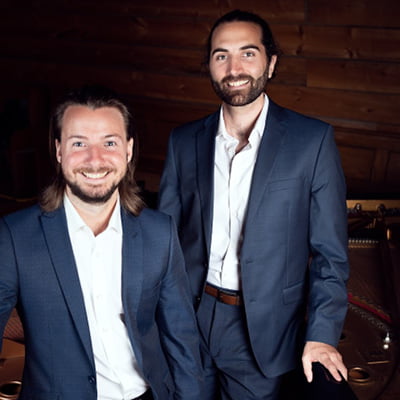 Carson Becke and Suren Barry form the two halves of Duo Octavian, a two-piano and piano duet ensemble. They are personable, energetic performers who love speaking to their audiences and drawing their listeners into their musical world. Duo Octavian seeks to expand the piano duo repertoire with their own arrangements, and with arrangements and commissions by other performers and composers. They have created their own two-piano arrangements of Brahms’s ‘Ein deutsches Requiem’, and Gustav Holst’s ‘The Planets’, and have given the Canadian premieres of arrangements of music from Gershwin’s ‘Porgy and Bess’ and Stravinsky’s ‘The Firebird’ by Dmitri Alexeev. Carson and Suren are both passionate about the natural world, and they believe that the performing arts industry has an important role to play in the global fight against climate change. They are committed to finding creative ways of adapting their activities as a duo to be more environmentally sustainable, and to raising audiences’ awareness about sustainability.