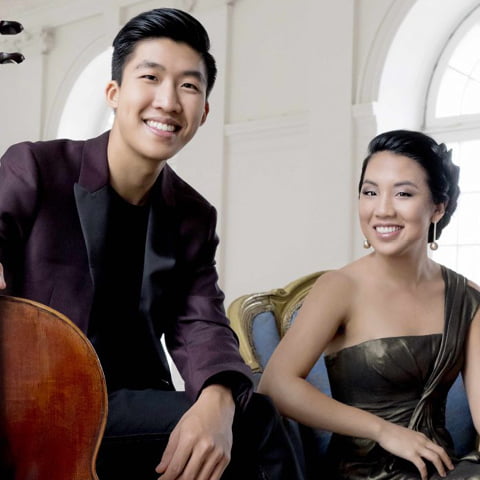 Cheng² Duo have made the journey from enthralled music fans to captivating their own legions of spectators on the global stage. Silvie and Bryan Cheng are a Canadian pianist and cellist duo who primarily perform classical and contemporary music under the name Cheng² Duo. Silvie completed her Masters Degree at the Manhattan School of Music, and Bryan is currently finishing his masters at the University of the Arts in Berlin.

The talented brother and sister are deeply connected to the audience experience thanks to their early participation in Ottawa Chamberfest, a summer music festival that’s grown to include a concert series.

In this article we’ll explore Silvie and Bryan’s experience performing as siblings, and how their early exposure to Chamberfest has shaped their artistic careers and how they share their passion for music.

The dawning of a musical career

Born and raised in Ottawa, Silvie and Bryan Cheng began attending Chamberfest as young, rapt audience members. Bryan describes some of his earliest summer memories lining up for concerts, mostly at the Carleton Dominion-Chalmers Centre. In the mid-1990s, there was no assigned seating, so passholders would queue for hours in the sweltering heat to get a front row view. As a small child, Bryan recalls sitting on cushions in the pews to bolster his vantage point of the stage.

The pair say there was nothing else like Chamberfest in Ottawa at the time, and they credit the festival as being a large part of their musical development. As children, playing music together came naturally for the Chengs, and attending the concert series to see the world’s best cellists, pianists, and trios take the stage further bonded the siblings to their common interest.

“That’s what fuelled us being able to envision a career in music—seeing our role models get to travel the world and play the music they love—and that has not changed since,” Silvie says.

From audience members to professional pianist and cellist

It wasn’t until 2007, when Bryan was 10 years old, that the siblings competed at Rising Stars—a showcase of the region’s emerging talent in a professional concert experience, where local students competed for scholarships.

After pursuing further musical studies, the siblings debuted on the Chamberfest stage as Cheng² Duo in 2013, and were thrilled to return to the festival as performing artists. The significance of coming full circle is not lost on the Chengs, and they aspire to share the depth of the concert experience with audience members.

“We’ve truly been in their shoes,” Silvie says. “We want to give them that same spark, joy, and love for the music that we got to experience at places like Chamberfest that sustained us into our music careers.”

Feeling at home at Chamberfest

Chamberfest continues to cultivate a balance of unique collaborations and showcasing Canadian talent. Cheng² Duo believes it’s the right direction, encouraging the audience to be open-minded and curious, which attracts artists to the festival. Year-round series, adapted concerts, the Chamber Chats: At Home, Chez vous series, and more, actively engage the community and make the offerings accessible to a wide range of demographics.

The Chengs compare Chamberfest’s programming with expanding one’s palate through food. If you only ever serve a guest Penne alla Vodka, you don’t know if they’ll like anything else. It’s a risk to dish up something they’ve never tried, but if you give them fresh sushi and they’re blown away, you’ve broadened their tastes. In this way, Cheng² Duo’s pairing of contemporary music with traditional repertoire complements Chamberfest’s creative community.

Cheng² Duo is planning their fourth album recording, featuring a few pieces that were premiered at Chamberfest. Separately, Silvie is heading to Chile for a tour, and Bryan will be playing in Switzerland and Poland this spring. Next year Bryan is making his debut at the Berlin Philharmonic Hall, which he expects will be one of the highlights of his career.

“The wonderful thing about music is that it transcends all these things that have the ability to separate and divide us, such as politics, race, and background—which are all very relevant topics,” Bryan says. “Music can be a platform to express things, but I believe in the end it should be something above all that unites us.”