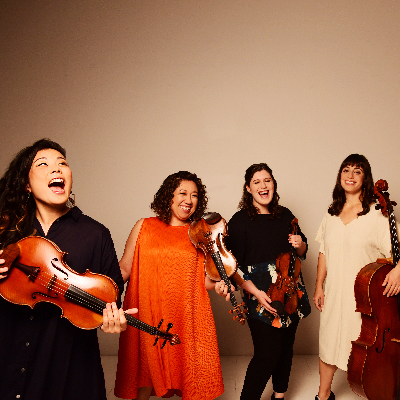 The Aizuri Quartet has established a unique position within today’s musical landscape, infusing all of their music-making with infectious energy, joy and warmth, cultivating curiosity in listeners, and inviting audiences into the concert experience through their innovative programming, and the depth and fire of their performances.

Praised by The Washington Post for “astounding” and “captivating” performances that draw from its notable “meld of intellect, technique and emotions,” the Aizuri Quartet was awarded the Grand Prize at the 2018 M-Prize Chamber Arts Competition, along with top prizes at the 2017 Osaka International Chamber Music Competition in Japan and the 2015 Wigmore Hall International String Quartet Competition in London. The Quartet’s debut album, Blueprinting, featuring new works written for the Aizuri Quartet by five American composers, was released by New Amsterdam Records to critical acclaim (“In a word, stunning” – I Care If You Listen), nominated for a 2019 GRAMMY Award, and named one of NPR Music’s Best Classical Albums of 2018.

The Aizuris view the string quartet as a living art and springboard for community, collaboration, curiosity and experimentation. At the core of their music-making is a virtuosic ability to illuminate a vast range of musical styles through their eclectic, engaging and thought-provoking programs. The Quartet has drawn praise both for bringing “a technical bravado and emotional power” to bold new commissions, and for its “flawless” (San Diego Union-Tribune) performances of the great works of the past. Exemplifying this intrepid spirit, the Aizuri Quartet curated and performed five adventurous programs as the 2017-2018 MetLiveArts String Quartet-in-Residence at the Metropolitan Museum of Art, leading The New York Times to applaud them as “genuinely exciting,” “imaginative,” and “a quartet of expert collaborators.” For this series, they collaborated with spoken word artist Denice Frohman and shakuhachi player Kojiro Umezaki, commissioned new works by Kinan Azmeh, Michi Wiancko and Wang Lu, as well as commissioned new arrangements of vocal music by Hildegard von Bingen and Carlo Gesualdo, which they paired with the music of Conlon Nancarrow, Haydn and Beethoven in a program focused on music created in periods of isolation.

Formed in 2012 and combining four distinctive musical personalities into a powerful collective, the Aizuri Quartet draws its name from “aizuri-e,” a style of predominantly blue Japanese woodblock printing that is noted for its vibrancy and incredible detail.