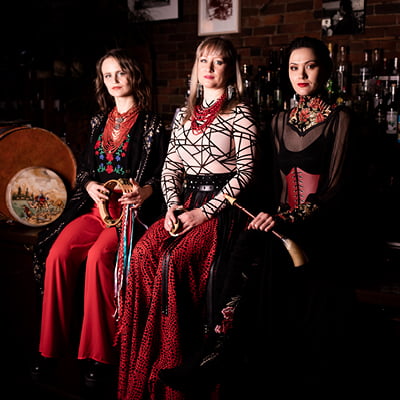 BLISK is a synthesis of polyphonic Eastern European song, dance and movement backed by hypnotic percussion.

It is described as a musical journey travelling through Ukraine, Poland, Russia, the Balkans and beyond. The Toronto-based, all-female trio was brought together by a deep love and respect for the ancient songs and dances of these regions, bringing the tunes to life in the modern world through unique original compositions, storytelling, dance and distinctive arrangements of traditional folk music.

The band’s original compositions are inspired by the countries from which the members hail – Ukraine, Kazakhstan and Canada. These are seamlessly intertwined and paired with traditional Eastern European and Balkan repertoire that crosses cultural borders. Dancer Stephania adds an extra element of dance, performing improvised modern choreographies inspired by the dance traditions of these regions, adding another layer to the texture of the overall show. Throughout their performance, the band regularly shares stories about the ancient rituals and folklore from which the songs originate, which is important to the group. The traditional repertoire they choose is rich in history, and the group feels it’s important for audience members to understand the often magical and fascinating context behind the material. As a result, the storytelling aspect of the show adds rich cultural value to the set.

BLISK also offers workshops in village song and dance, again bringing the audience into the context and culture of the music they adore.

BLISK debuted in December of 2017, at the Aga Khan Museum in Toronto where they opened for JUNO-nominated Turkwaz. Since then they have performed at various venues and festivals including: Ashkenaz Festival, Toronto Ukrainian Festival, Sofar Sounds, the Global Toronto Conference, SING! Festival, Labyrinth Ontario’s Concert series, Summerfolk, Harrison Arts Festival (BC), Capital Ukrainian Festival in Ottawa, and had official showcases at Folk Alliance International, BLOK and Mundial Montreal.