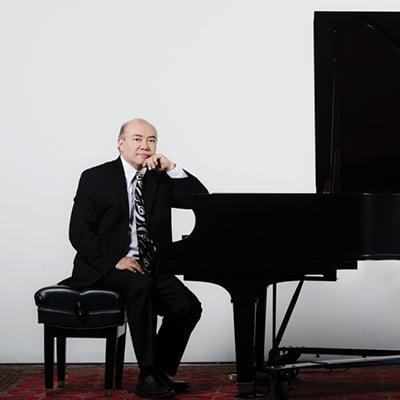 The year was 1999. I was at the Mayflower Pub on Elgin Street in Ottawa, sharing a few post-concert drinks with other musicians. I found myself sitting across from a Chamberfest volunteer. We hit it off right away. Little did I know, the volunteer, Mim Pearse, was going to be my future wife.

This moment is what makes Chamberfest so special to me. It’s also why the Canadian music festival continues to be my favourite event of its kind after so many years. I proposed to Mim a year later, at Chamberfest.

Making memories as a touring pianist

My chamber ensemble, three-time JUNO winners Gryphon Trio, is almost as old as Chamberfest itself. I attended the second festival as a solo pianist, and Gryphon Trio performed at the third Chamberfest, so we’ve grown up with the organization. It’s been a big part of my professional life. Some of the people we’ve met in Ottawa through the festival have become close friends, as well as donors and supporters of Gryphon Trio. After 29 years of travelling the world as both a soloist and chamber pianist, Chamberfest represents some of the most important venues, relationships, and audiences in my life.

The festival has changed a lot since the early years. Chamberfest went through an enormous and astounding growth spurt, from a handful of concerts to about 120 at its peak. Such rapid growth for a Canadian music festival was hard for any one person to keep up with.

After Roman Borys took over as artistic director, Annalee Patipatanakoon and I came on as artistic advisors, and we were able to contribute to programming in addition to keeping the ship on course. For the first time, we were able to really expand Chamberfest’s staff. Chamberfest’s growth goes beyond individual contributions—we’re here for whatever time we have, in whatever role we have, but the hope is that the organization will survive us.

COVID-19 absolutely devastated the Canadian music scene and the performing arts in general. When you’re a performer, you miss touring because it’s a big part of you and something you love doing— something you’re put here to do. Performing can be simultaneously deeply tiring, as well as invigorating and joyous. The musicians I’ve met through Chamberfest have a profound understanding that what we’re doing is important—it’s vital. We’re not in this to be JUNO winners. We’re in this to share music for the rest of our lives.

Jamie Parker is a critically acclaimed concert pianist and chamber musician. He is the touring pianist for Canada’s chamber ensemble, Gryphon Trio, and the recipient of three JUNO recording awards with the group. He is currently the Rupert E. Edwards Chair in Piano Performance at the University of Toronto Faculty of Music.