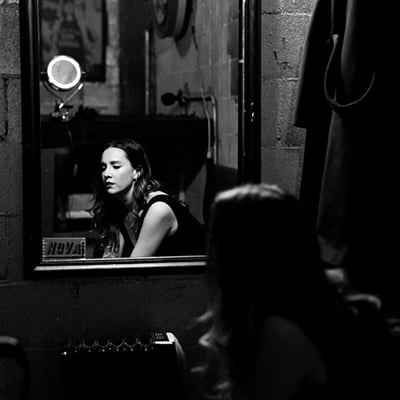 Rachel Fenlon is a Canadian soprano and pianist who approaches music with a spirit of inquiry and creative passion. After completing her Masters Degree in Opera Performance, Rachel began to fuse her interests in voice and piano to push the boundaries of self-accompanied performances, solidifying her place among trailblazing Canadian musicians.

In this article we’ll learn more about Rachel Fenlon’s process as a pioneering young artist, the pieces that shape her live performances, and how she believes Ottawa Chamberfest cultivates a sustainable platform for up and coming performers.

Rachel fell in love with the cultural Mecca of Berlin upon discovering the city’s diverse and celebrated musical history in her early 20s. Driven by musical curiosity, she moved there seven years ago. After immersing herself in the city’s distinct European lifestyle, Rachel began performing concerts the way she’ll be performing among Canadian music artists at Chamberfest this summer—singing and accompanying herself on the piano.

Rachel describes this method of performing as incredibly liberating. “There’s no set way, and there’s no set outcome,” she says. “It has this beautiful research and curiosity aspect to it, and it’s like anything is possible because we don’t know where it goes.”

However, Rachel’s unique style was met with some apprehension by festival programmers, who were unsure how to categorize the performance. Rachel says she’s often been asked how to classify her—people wanted to put her in a box, but the box didn’t necessarily exist. These days, she classifies her work as song-recital. Every concert is a unique pairing of her vocals with piano accompaniment.

“My motto is, it’s all explorational, therefore I try everything,” Rachel says. Keeping a broad repertoire, she plays interpretations of composers such as Benjamin Britten, Franz Schubert, Robert Schumann, Johann Brahms, and contemporary, prepared piano pieces, as well as commissions. She also performs a cycle by George Crumb that involves playing the piano on the inside of the strings, which she describes as performance art.

Chamberfest provides a platform for innovation

Rachel’s drawn to Chamberfest as a rich space of programming and repertoire, ripe with opportunities to explore as a Canadian singer. But she feels the most important components, community engagement and education, encourage young artists and nurture the next generation of performers and audience members. The trust Chamberfest programmers place in world-class Canadian musicians resonates with Rachel and encourages her to continue exploring creative avenues onstage.

For her premiere at Chamberfest, Rachel will be performing Winterreise by Schubert, one of his most famous song cycles, which is typically sung by men. Rachel expresses the concert as a big first for her, though she says other female Canadian singers have taken on this cycle in the past. “We all have to challenge each other,” she says. “But if someone has a strong reaction to what I’m doing, it’s speaking to them in some way.”

Rachel’s next move is to head on tour in Germany and Austria to perform a springtime program that contains timely songs of rebirth and renewal. She’ll later return to Canada to spend three weeks in Vancouver, performing with orchestras and solo before joining Chamberfest with other talented Canadian musicians later this summer.